Omg! One day late with the blog! Had so much fun with Francois so just did not put time aside to write! I am waiting at the Apple shop in Geneva to get some help with my new iPhone X , so had the time to finish yesterday’s blog!

A sum up! Started my day with trying to start my new IPhone X, but he was behaving wired, took me like 3 hours in the morning before I just took the decision that something was not normal with the X!

So went to the stables! And the first one I meet was the dressage dressage trainers dog Hector! So cute!!!!

Me and Niki started with Duc and Ice Tea! 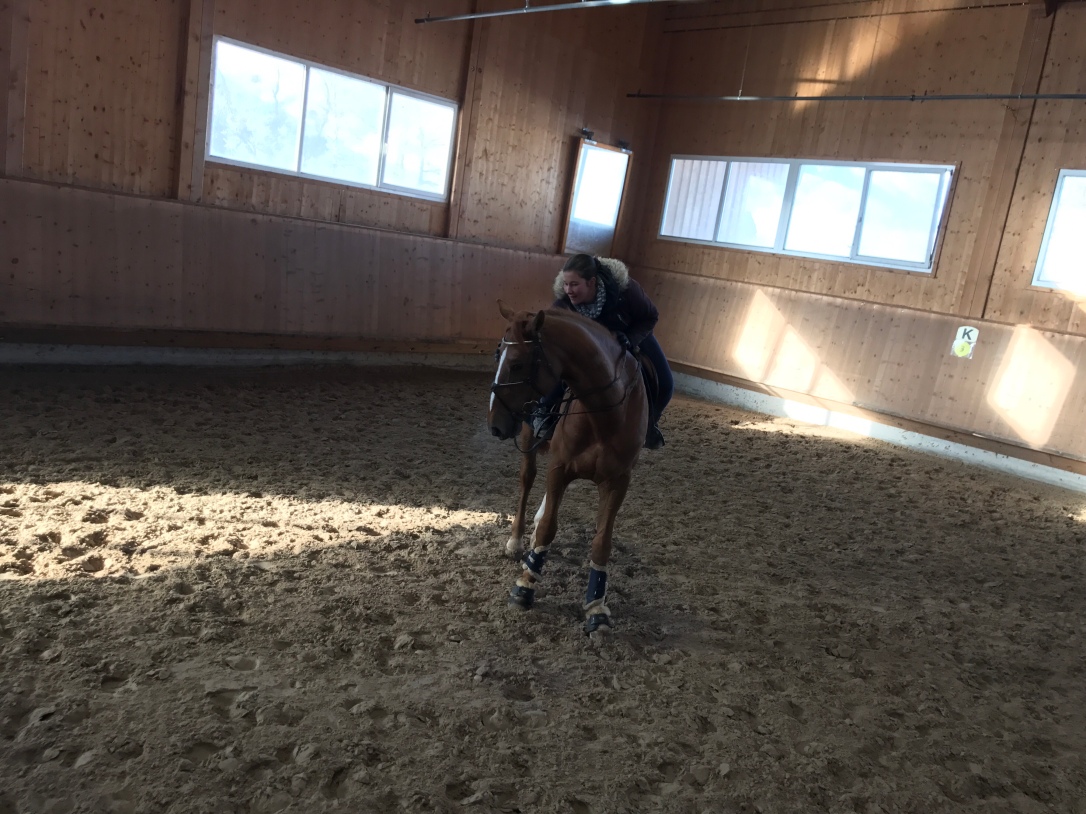 She was riding around on Ice while I was working Duc! Duc had quite hard work today! Loads of gallop! Galloped a couple of rounds forward, then collecting, then forward! Was all the time working on my own position and his balance! If I let him be strong in my hand and lean forward with my body he put his wight on he front! So, important to sit up and work him in every stride! Both me and him got sweat!

then I got Ice Tea, and he was like: “HEY I REMEMBER THAT YOU LET ME RUN LIKE I WANTED ON THE CHRISTMAS SHOW, SO IM JUST GONNA CONTINUE TO DO THAT” I was like please don’t do it! But he did it! So instead of being able to take it to the next level with the big powerful strides I had to back backwards and only concentrate on making him wait and be light in the hand 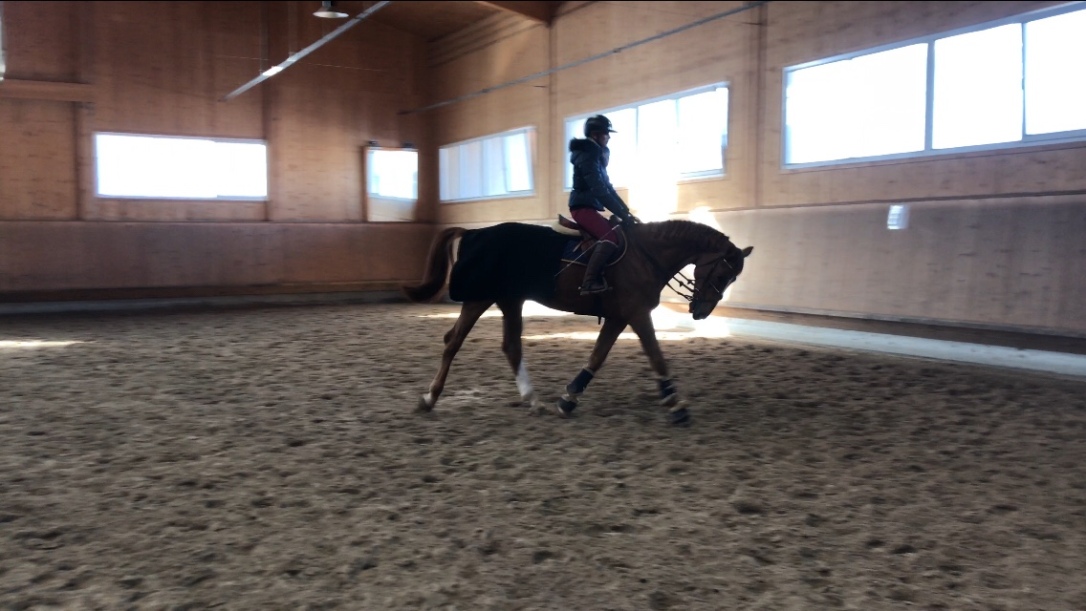 Next was Alf’i, quite fresh! So today he got work also! I let him go in his comfortable speed first, he has like one gear where he don’t spook, it’s a speed where it’s not to slow but not to fast, no powerful steps just like half lazy moving forward! So let him do it like that a while before I really started to work him! Started to gallop forward and wips it was scary stuff in all the corners that he could jump to the side for! I just ignored him and pretty soon he was concentrated on work 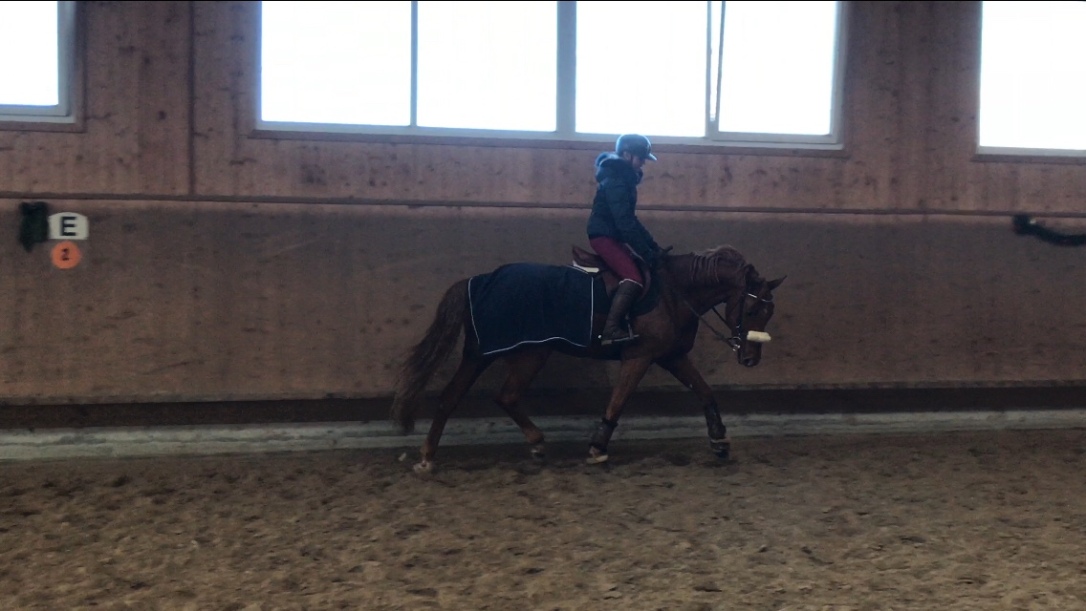 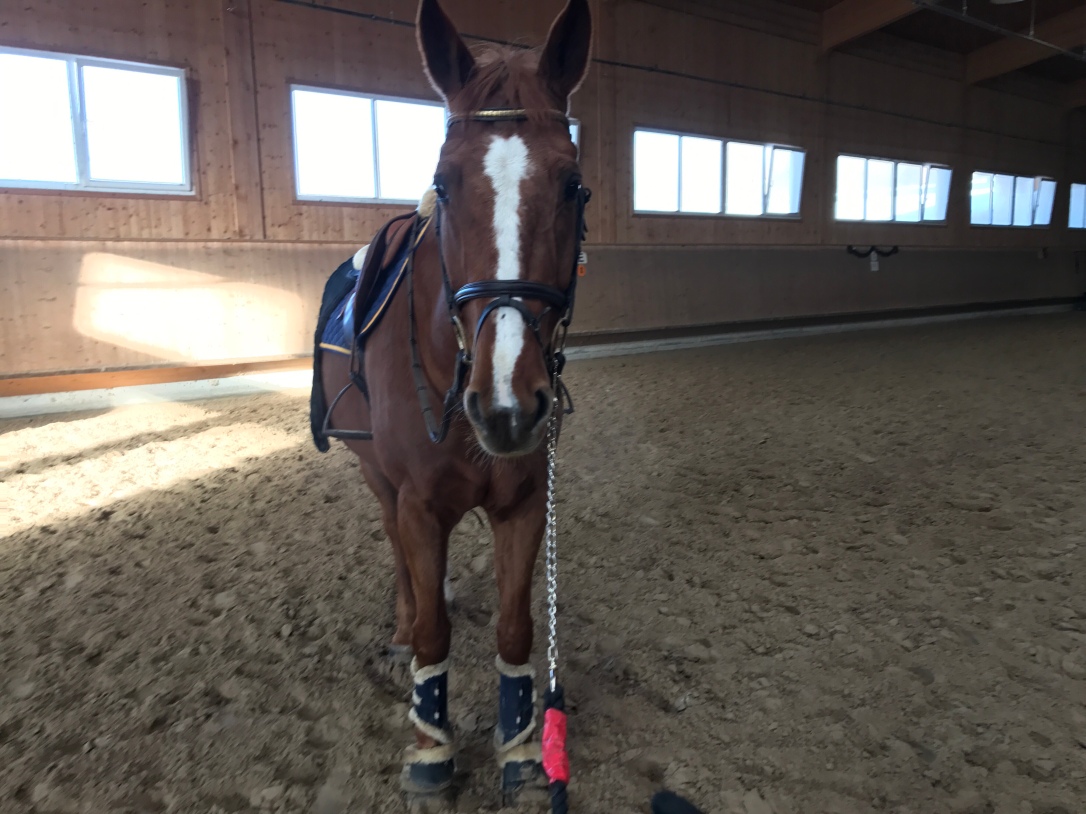 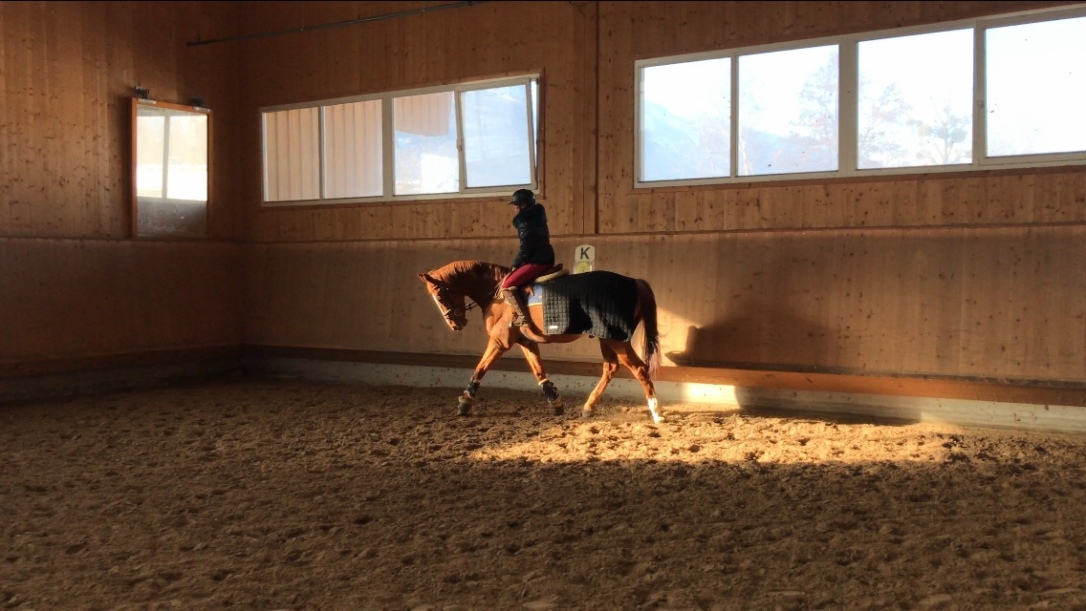 After that was the Giraffe! She was good! Did a lot of riding forward thought the turn and collecting on the short sides! She did not sweat so no sweat rug after

Duc after training in his sweat gear!

So much snow here! Love to ride outside but my horses don’t have studs! The other winters I have been here it has maybe been two weeks of snow at the stables, but this year more I guess 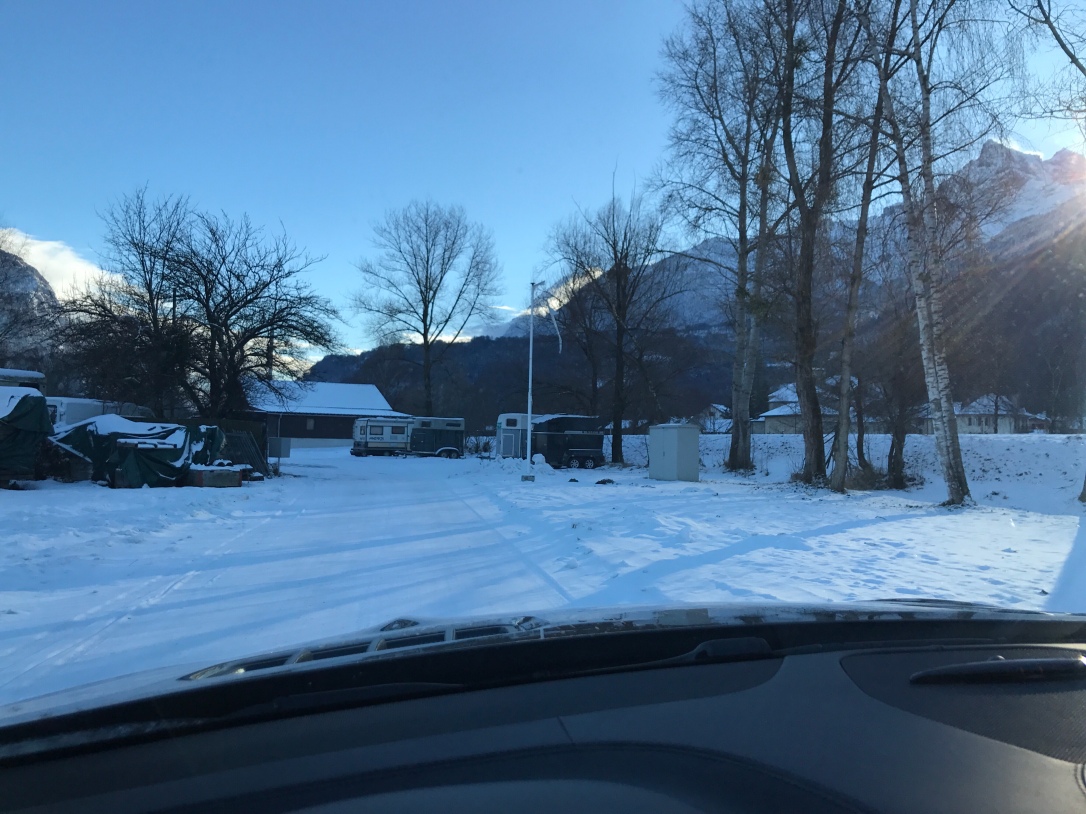 Did a little mountain walking before I went home!

At home me and Francois had so much fun, we also went to the gym, had dinner and hot chocolate 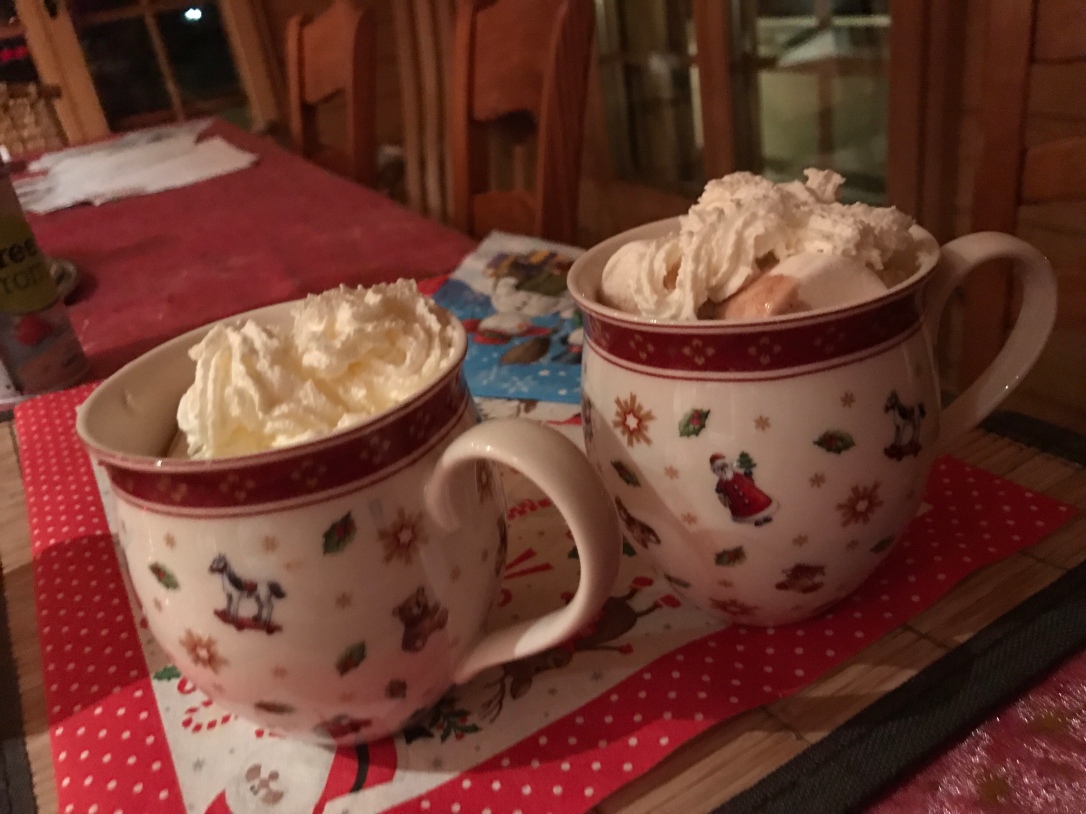 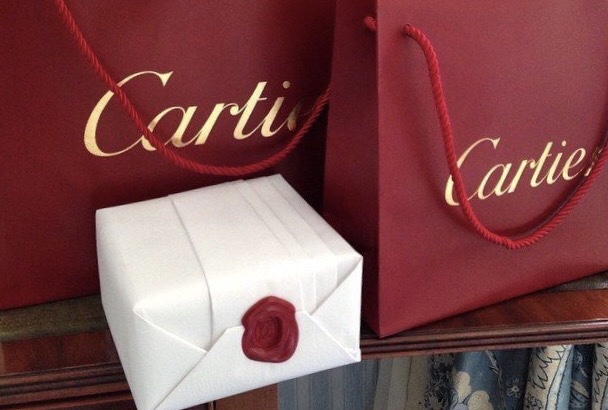 I was up to like 02.00 wrapping gifts for the Red Cross in Geneva! We always buy loads of teddy bears and this year a Handbag from one of my favorite brands for women and a perfume for men!